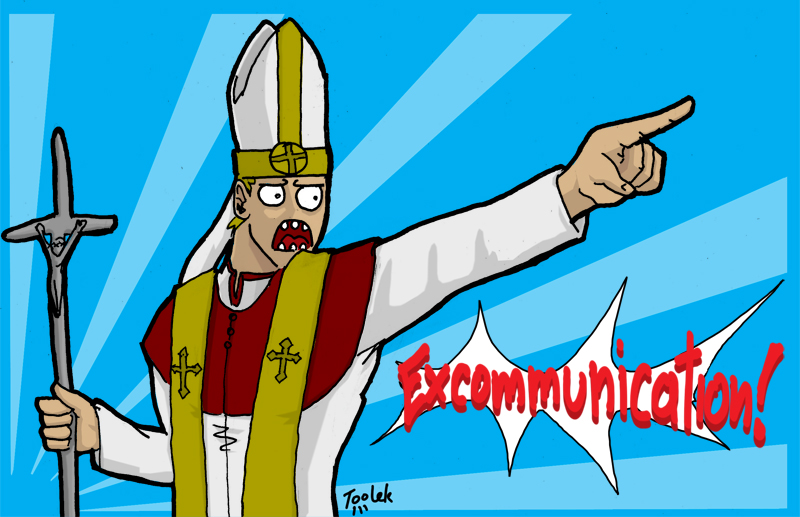 “Dear Sapulpa Messenger,  what is the meaning of this letter I got from FBC?  Am I being disciplined?  Nobody called me or anything. I’ve been going to Sunday School but skipping the preaching.  Can they really do this?”

Dear friend, What you have just received is a polite yet arrogant church discipline letter.  You are being told to come to the worship service. If you don’t you will be forcibly removed from the rolls.  This is not an exaggeration.  It is 9Marks.

We’ve covered the 9Marks process before but let’s review it again in light of FBC Sapulpa’s coming night of broken glass…  Step 1: Expel unhappy members from the rolls so they can’t vote.  Step 2: Pass sweeping changes and tighten the grip on those that remain.

“At the members’ meeting of our church in May 1996, we faced a daunting task. The sixty or so of us there needed to go through a list of 256 names—more than half our membership—and remove them from our church roll…

we were free to go on through the list, removing from membership even children and grandchildren of those sitting there in the meeting. Those who were perfectly able to attend but had not been doing so for months, even years, we removed…

We had labored for months to contact every member by phone and by letter. Some we simply couldn’t find. In the letter, we asked for members of the church to sign the church’s statement of faith and the church covenant. We informed them that if they were not regularly attending, and if they failed to sign and return the statement and covenant, it would be recommended to the congregation that their names be removed.”

These are the words of 9Marks founder Mark Dever given to Christianity Today in the Fall of 2000.  The name of the article is most telling.  It can be found here under the original title:  “Why We Disciplined Half Our Church”

Clearly the Calvinist 9Marxists believe the removal of members from the rolls is a form of church discipline.

Exactly two years later in May of 1998,  after the systematic removal of members whose attendance had lapsed or who refused to sign the contract, the true reason for the mass excommunications became evident to the confused sheep who had survived.  A new Constitution was to be voted on by the church.

The final piece of Dever’s diabolical plan would fall seamlessly into place.  Those that remained could do little more than whimper as the Calvinist constitution was approved.  Those who would oppose this change had already had their membership revoked.  This hideous church conquering strategy birthed by the Calvinist preacher lacked nothing except a name.  Eventually this “ministry”, the ministry of helping young pastors “reform” churches would come to be called something we are all familiar with: 9Marks.

We First Warned You About This in 2015

The Sapulpa Messenger began warning FBC Sapulpa about this in early 2015 when we learned that there was already a 9Marks takeover plan in the works.   We knew that some of the deacons were already being indoctrinated with 9Marks.  We knew that the new FBC Sapulpa plagiarizer-in-chief was a believer of 9Marks and had implemented it at his former church which resulted in an unmitigated disaster.  We even saw 9Marks promoted by the FBC Sapulpa website as can still be seen in this screen capture below: 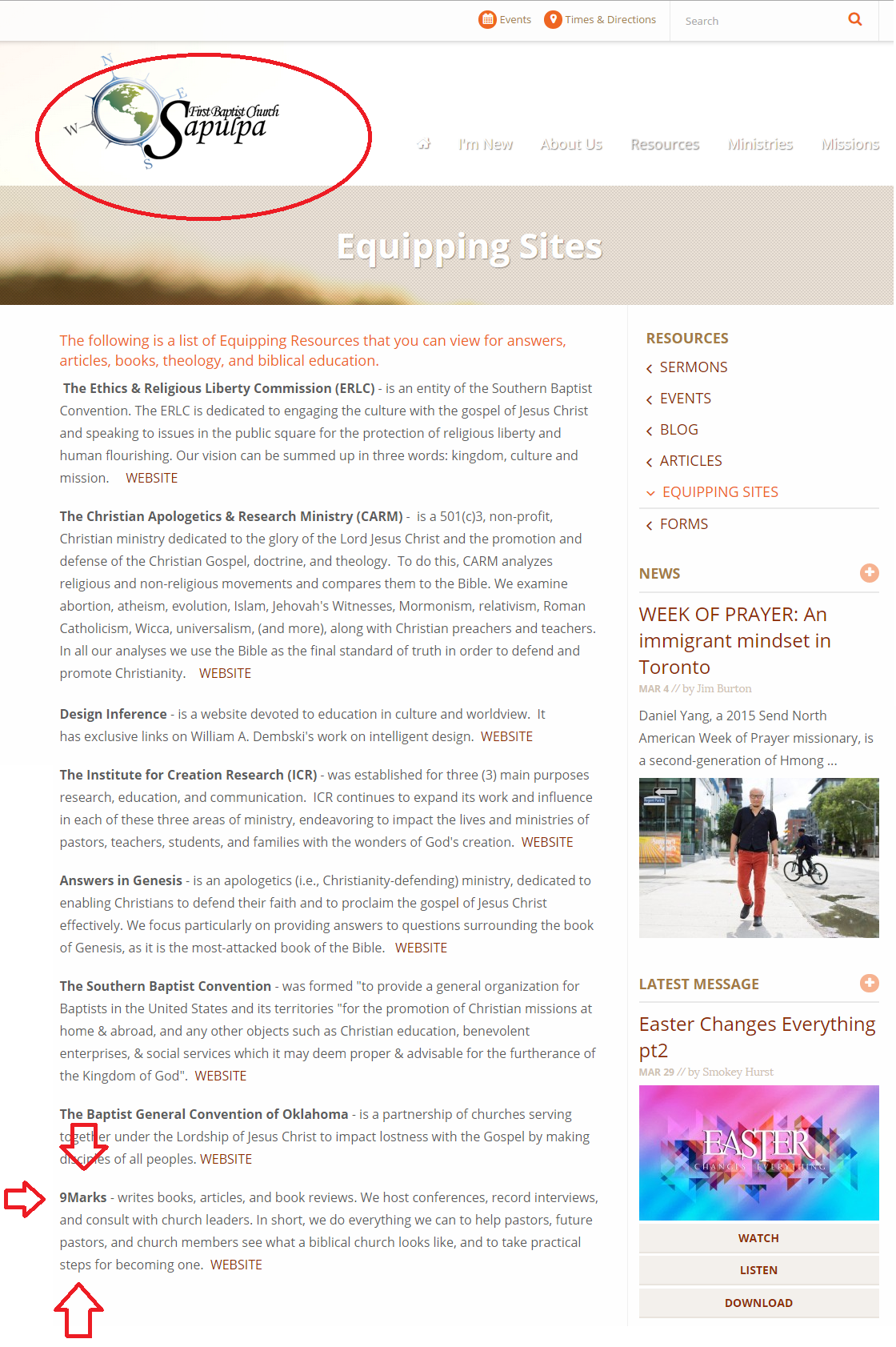 In case there was any question about who was behind this, a concerned member asked the FBC Sapulpa CEO directly “Did you sanction the 9Marks link?”  His response in an email from April of 2015 was leaked to us and is recorded below: 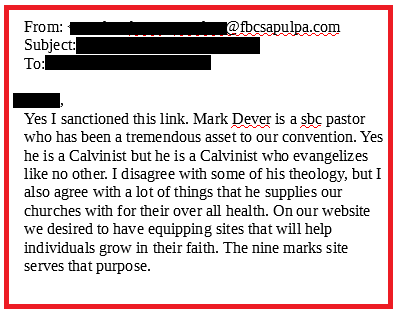 You can look at our previous posts going back to March of 2015 and the video we produced and released on youtube.  Over the years we’ve posted plenty of material gleaned from numerous real world 9Marks church massacre stories.   From the very beginning it has been obvious.  This is a CALVINIST system of power and control, but it can be used by anyone.

As we highlighted above, vital to the implementation of the 9Marks is church discipline.  It is a tool by which people are ruthlessly coerced into following the commands of the church lords and harassed under the guise of “love”.  It is almost always “bathed in prayer”.  Yep, we called bull on all that.

In his article “Why We Disciplined Half Our Church”,  Dever describes the process of removing people off the church rolls and makes no bones about it.  It is church discipline.  The true purpose of this discipline was not to correct them into coming back.  The true purpose was to permanently eliminate dissenters who had stopped attending due to conflicts with the insidious dictator.  When the vote on the new Constitution would finally take place, none of the resistance was allowed to attend the meeting and of course it passed.  The church was “reformed.”

Early on we got out in front of this plot at Sapulpa and exposed it to the entire church.  At the time, people were willing to look into the allegation and do their own research.  This led most members to demand an abandonment of the 9Marks.  Eventually enough of the good ol’ Southern Baptists got involved and the pressure became so great that the CEO of FBC Sapulpa was forced to give a public apology.  Not only did this guy apologize  in front of the entire church at a business meeting but he also made a public commitment to NOT pursue the 9Marks agenda.  The church was assured that the 9Marks agenda was over.  This was met with a great sigh of relief by the majority of the church.

But it, as with many other things,  was a dirty lie.

They’re At It Again

Folks, what you are seeing at FBC Sapulpa today is the classic 9Marks system being implemented in a perfect textbook manner.  Letters have gone out to all the enemies of the church.  If you you received one of these and you do not reply or refuse to attend the preaching service then you will be erased from the rolls. You are about to be disciplined.  This is an exact duplicate of Dever’s process at Capitol Hill.

It is worth noting that many of these people are refusing to attend because they are disgusted with the church lords.  Many of them would come back if the church would come under new management.  Of course the church lords fear this and must fortify  their power at all costs.  (After all, they have built a great empire with vast amounts of real estate.) Removing people from the rolls eliminates their voting powers plain and simple.

Dever claimed that they at least spent months attempting to reach these missing members on the phone and in person.  At FBC Sapulpa we’re told by nearly everyone who received a removal letter that they were not contacted at all.  Many of these people still have the same 224 phone number they’ve had for decades.  It appears there is more interest in removal than in fellowship.  The letter is an empty platitude.  Just like the scattered and disgruntled sheep at Dever’s church, your old friends and family members are about to be disciplined by you and your church.  Sadly, the last word they will hear from the church is that they are being terminated.

It has taken a while to get here but we’re entering the final stages of a thermonuclear church meltdown.  Let’s get real.  It’s not that 50+ year members aren’t attending FBC Sapulpa anymore because they’ve turned their back on God. It is because it is obvious that FBC Sapulpa has become a charade and a tragic joke in the community it once served and people refuse to be associated with it.  Attendance is reaching record lows while pastoral pay is at an all time high. It appears the rich young rulers who have transformed this church into their personal religious social club are still subsidizing their banana republic staff.  As long as their money pays the bills nothing will change.  The pathway to destruction is wide and winding but we’re rolling smoothly down the middle of it.  At FBC Sapulpa there will be discipline and damnation of those who dare to leave.  And what lies in store for those who stay behind?  Go back and read our past articles.  You can’t say we didn’t warn you.