In 2004 Baptist Press published an article in which an up-and-coming pastor laid out his new ideas on blending elder rule into congregational churches at a Baptist church polity conference.  The article led in with this statement:

“Elders and congregationalism. For many Baptists, these terms sound like polar opposites.”  —“Elders  in Baptist Churches” Baptist Press, Feb 13, 2004

Just three years later this new fad had been promoted so vigorously that it prompted a response from Morris Chapman, then-president of the executive committee of the Southern Baptist Convention.  Writing for Baptist Press in 2007, this non-Calvinist Baptist stated:

“Parenthetically, the matter of elders leading the church as officers is often discussed in association with Calvinism.”  “First-Person” Baptist Press, June 22, 2007

The up-and-coming pastor promoting this new way was Calvinist leader Mark Dever. His purpose was to get the Calvinist elder-controlled church government system’s foot in the proverbial door of every church in the SBC.  This would pave the way for Reformed Theology.  He has been very successful.

Initially, the Calvinists came on a little strong without masking the reformed doctrine.  In an interview on July 1, 2015 the 9Marks leader explained:

“We were originally called the Center for Church Reform, but then we noticed pastors getting into trouble with their congregations for referring to an organization that seemed to suggest that they should change. So we decided to go for the simple positive name of 9Marks, which would represent those issues in the local church we were specifically addressing.”

Are we to really believe they dropped the word REFORMED from their name because people were scared of “change” or is it possible they recognized the reference to Calvinism and threw themselves in the floor? A “reformed church” to a Calvinist means “Reformed Theology”, aka 5 point Calvinism.  This is a theology that is repulsive to the average Baptist… if it is easily identifiable.

Despite the misleading statements, Dever certainly knows what his organization’s purpose was and what is meant by the use of the word “reformed”.  At the 9Marks website with an article he penned in 2014 entitled “Where’d All These Calvinist Come From?”  he says:

Over a decade later, the elder-controlled church polity doctrine has overshadowed enough churches that 9Marks feels a little more comfortable in coming out of their Calvinist closets.  The TULIP is blossoming in the SBC.  Check out this recent post from 9Marks on facebook. 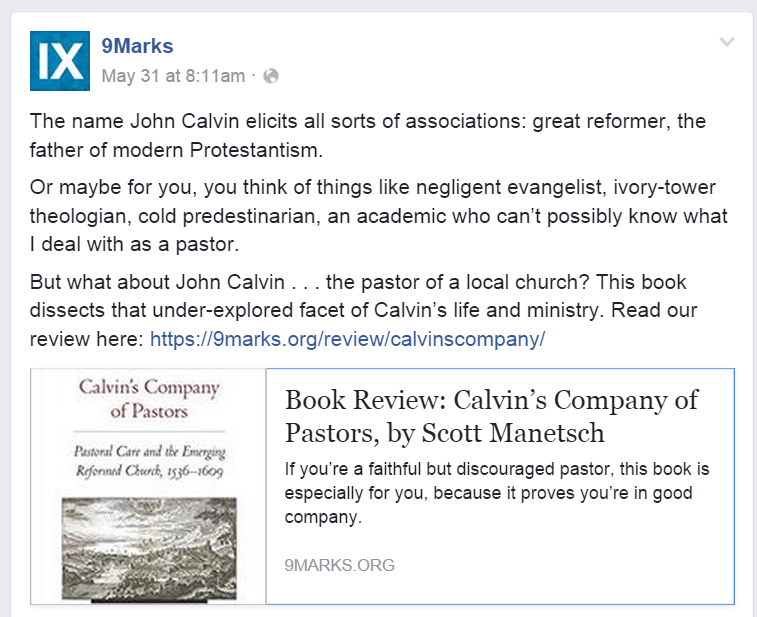 Many power hungry non-Calvinist leaders have benefited from the 9Marks elder controlled church system and are now proudly standing beside them.  Check out the list of speakers at the 9Marks pastors conference in Texas scheduled for August 2016. 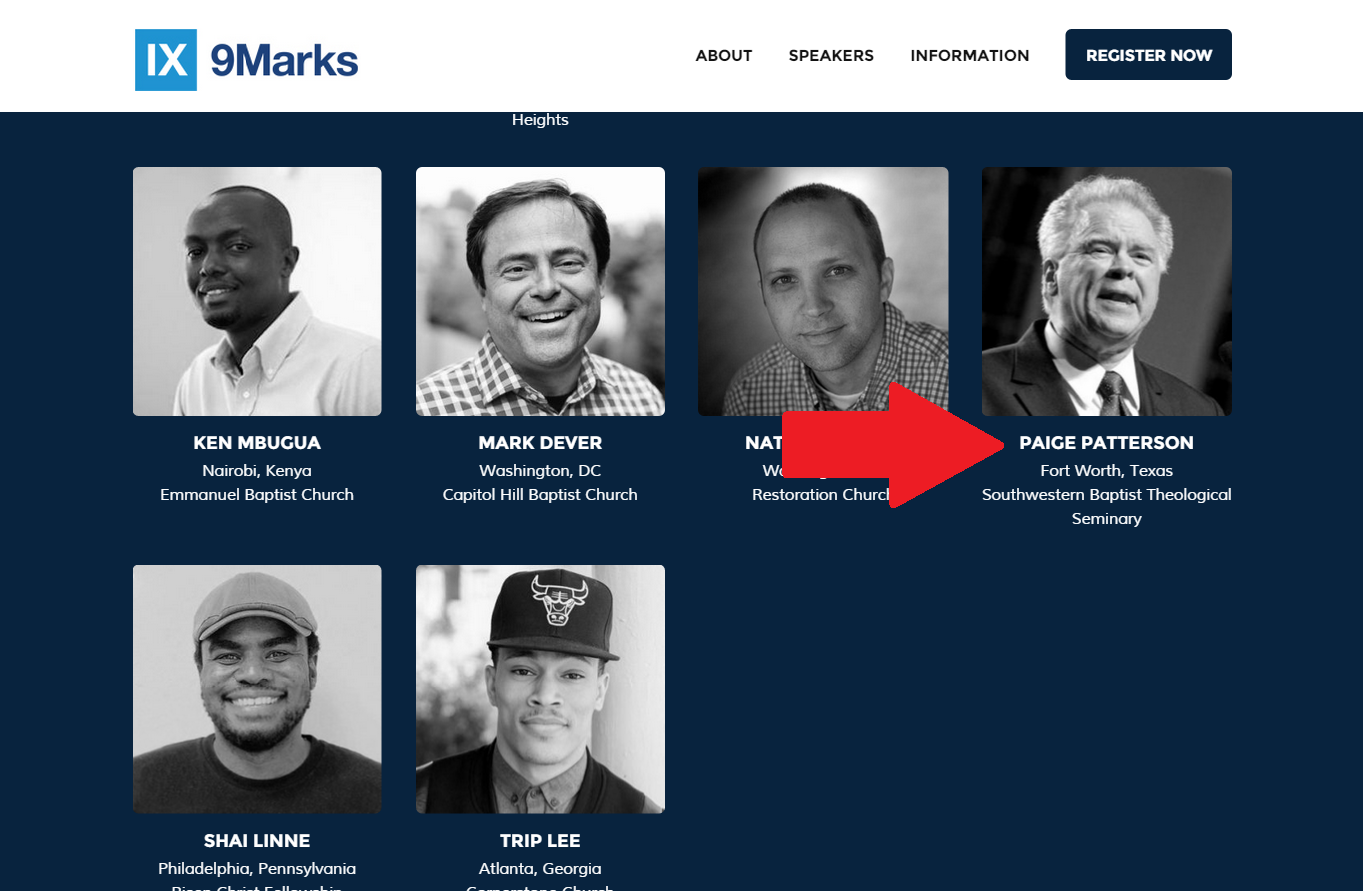 Dever and Patterson joining forces.  What a treat that must be, but they only let rookie pastors attend this indoctrination session.

Dever’s strategy of inserting Calvinism into the core of the SBC has really paid off.  9Marks is now hard coded into the SBC and, unless a person has a Baptist background, they may not even realize what the Calvinists have done. It is hard to fathom what is happening at the 2016 Southern Baptist Convention.  Guess who is telling us about the state of the SBC this year? 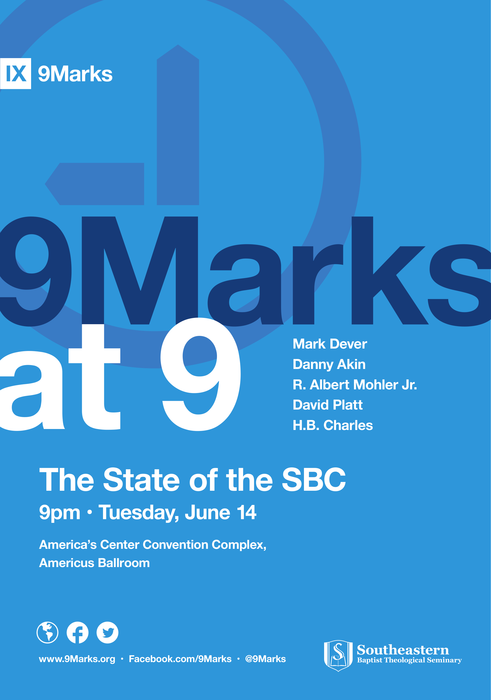 State of the SBC by 9Marks.  What is the state of the SBC, Mr. Dever?  Things are looking pretty peachy from the Calvinist perspective.

Now, they are about to make a move that will help tighten their stranglehold.

The conservative resurgence taught us that the course of the SBC is set by the President.

“In the early 1970s, William Powell, at the time an SBC employee, developed a rather simple strategy to take control of the SBC: elect the SBC president for ten consecutive years. The SBC president appoints the committees that name other committees that nominate trustees for the denomination’s institutions, including the seminaries. Trustees of institutions served five years and were eligible for reelection once. Therefore, by occupying the presidency for ten years one could ensure that all appointments, nominations and new seminary hires stood in a line of succession trailing back to the president.”  —“SBC Takeover” wikipedia

In 2006 Mark Dever ran for 1st Vice President of the SBC and was defeated.  His Calvinist supporters were a minority element 10 years ago.  That may no longer be the case.  While he has not thrown his name in the hat this year, they do have a little something special for us.

There are three names on the ticket this year for President. 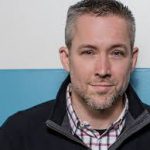 JD Greear is pastor of The Summit Church in Raleigh, NC.  He is a hardcore Calvinist and also a charismatic Neo-Cal.

His church is listed in the church finder directories of 9Marks, Acts 29, and The Gospel Coalition. (These are all die hard Calvinist organizations.)  Acts 29 Network, to which The Summit Church Belongs, was founded by the infamous Calvinist leader Mark Driscoll whose elder-ran mega church Mars Hill disintegrated in 2014.  Acts 29 is hardcore Calvinist but also promotes the charismatic movement.  This strange blend of “doctrines” is called Neo-Calvinism and is not consistent with the Baptist denomination at all.

On charismatics, Presidential candidate Greear told the Christian Post in a 2012 interview:

“You’re never going to hear me either publicly or privately tell somebody that they should not be speaking in tongues in their private prayer times. That’s not going to be forbidden at our church.”   —NC Mega Church Pastor,  Christian Post, May 1, 2012

In the same article Greear described his church as “charismatics with a seat-belt”.  David Platt, the current president of the IMB, is also a member of this neo-Calvinist charismatic movement.  In 2015 he reversed the Baptist restrictions on missionaries speaking in unknown tongues. At the same time for alleged financial reasons, he had to “retire” many older missionaries (the demographic that was mostly non-Calvinist) and then replaced them with newer more Calvinistic ones.  This bizarre movement also includes men who are quoted by people on staff at Sapulpa, like creepy Calvinist John Piper.  Below is a brief example of what these guys are promoting.

The Wartburg Watch was the first watchdog group to comb through Greer’s Calvinist background.  They pointed out on their blog here that:

We also noted Lectures on Calvinism by Abraham Kuyper.  These are all Calvinist authors. (It’s a little surprising he still promotes Mahaney even after the child sex ring scandal and Driscoll who plagiarized his book but hey, Calvinists stick together.) 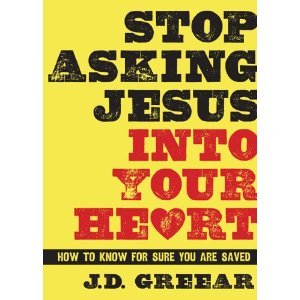 Greear is also an accomplished author. He wrote a book titled “Stop Asking Jesus Into Your Heart” in which he promotes the Calvinist teaching of Lordship Salvation which is a total Gospel killer.

We don’t say this lightly. Greear is more Calvinist than John Calvin himself.  He reeks of it.  He is hooked up with 9Marks.  He is pals with IMB wrecking-ball David Platt.  He is deeply involved in the Calvinist takeover of the SBC.  You can bet your last cooperative program dollar that he will make committee appointments of only those who will go along with the Calvinist cause.

The church at Sapulpa featured Greears book in the library window.  It was placed there by someone on staff.  What does this tell us?

The church at Sapulpa is sending messengers  to the 2016 Southern Baptist Convention.  They will elect the next president who will have the appointment powers needed to change the face of the denomination.  These messengers represent the church at Sapulpa.  Some of these messengers have previously supported 9Marks, as well as John Piper, Paige Patterson, and other destructive people.  The Gospel is not a game and Calvinism is not something we need to be toying around with.  There is still time for you to remind your messengers that they represent you and that you do not support the furtherance of the Calvinist agenda in the church at Sapulpa or in the Southern Baptist Convention.  Find them and find out who they are supporting.