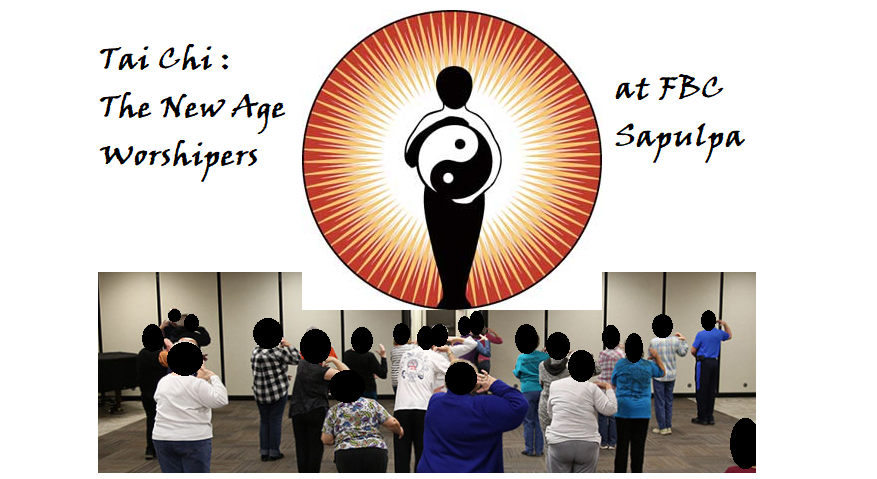 To our senior adult readers, please hear this admonition with an open heart and know we mean no offence.  What you are engaging in at church is absolutely terrifying.  Today we are pleading with all those who have been innocently swept up into the church’s latest foray into eastern mysticism and the New Age Movement.

What you see below is the New Age eastern mystic symbol that you probably know as the “yin-yang”.

In reality the two halves represented by darkness and light are individually called the yin and the yang, while the entire symbol is called the “TIA CHI”.  Don’t believe us?  Google search this term “Tai Chi symbol”.  Here is what you will get: 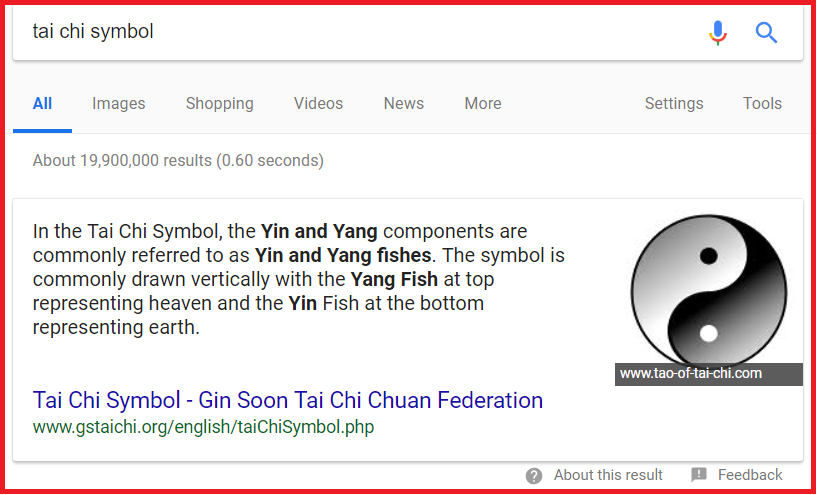 Tai Chi has its roots in Buddhism, the devil’s false religious system that has deceived the nation of China for hundreds of years.  Though the yin-yang makes this new age religious practice easily identifiable, there is more to Tai Chi than just a symbol.

The Tai Chi, the physical exercise, appears in both Taoist and Confucian religions. Tai Chi is translated as “moving ultimate force” and is generally referred to as “moving meditation”.  This, along with Yoga and Reiki, have long been rejected by most baptist churches as extremely dangerous because they open up the student to demonic influence.

Now you’re probably saying, “well I’m a Christian, I can’t be possessed by demons”  and you would be technically correct.  However,  you can invite demon oppression by engaging in religious practices that were developed in the demonic realm.  It is no different than playing with Ouija Boards, going to seances, or visiting a psychic/witch. (Deuteronomy 18:10-11)

Tai Chi is wholly incompatible with the gospel of Christ.  Tai Chi teaches that what we call “God” is actually a “universal force”.  Tai Chi teaches that through proper breathing, exercise, and meditation you can become one with this force.  This false teaching is known as “pantheism“, one of the heresies of the early Gnostics and a belief that is held by New Age leader Oprah Winfrey.

There is plenty more that could be written on this subject but it is perhaps best to refer you to the overwhelming number of other Christian pastors, authors, bloggers, and laymen who have been preaching this warning for some time.  Here are just a few external links:

Also, this video from Christian minister Yip Kok Tho briefly explains the “blending of good and evil” which is accomplished by Tai Chi.

There is a real easy way to say this.  By practicing this New Age art you are paying homage to the Devil and opening the door for demonic oppression of yourself, your children and your grandchildren.  Those who have been under the spell of the New Age movement, Yoga, Tai Chi, or transcendental mediation and have become Christians are unified in their call for Christians to flee from these false religious practices.  Here is something you need to remember.

“Now the Spirit expressly says that in latter times some will depart from the faith, giving heed to deceiving spirits and doctrines of demons…” –1 Timothy 4:1

and we are to have nothing to do with them.

“And have no fellowship with the unfruitful works of darkness, but rather expose them.” –Ephesians 5:11

What you are doing is not innocent fun.  It is extremely dark and dangerous.  Please, for your own sake, and the sake of those you love, stop practicing Tai Chi.  You should also ask God in prayer to forgive anything wrong you may have done in ignorance and ask for his protection against any evil you may have unleashed.

It is bewildering that FBC Sapulpa’s shepherds have allowed this religious ritual to take place in the church.  They know the dangers of Tai Chi and we are at a loss to explain why they are not vehemently opposed to it. This is not “a matter of conscience.” It something that FBC Sapulpa must be cleansed of without delay.