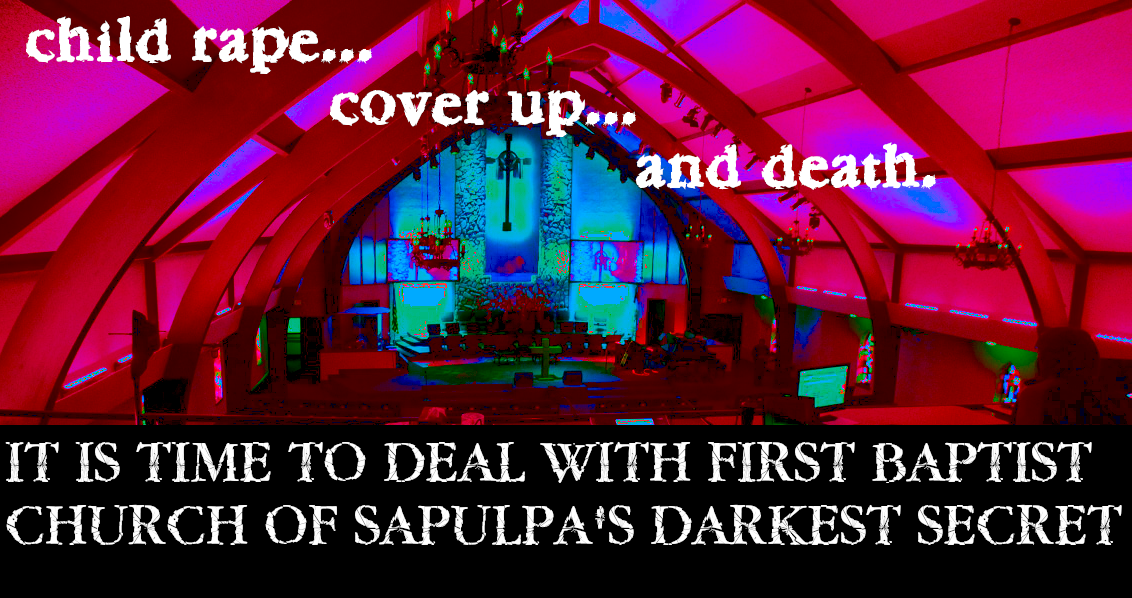 What you are about to read is completely true and accurate.  It is the result of years of careful research, interviews, and clandestine investigating tactics.  As you read please understand that many of the people involved in this story are alive and struggling.  Some are still members of FBC Sapulpa.  Many of the victims, however, have altogether rejected Jesus as Savior.  Sadly, at least one young man is dead because the church chose to hide what happened to him.  Meanwhile the child rapist is alive and well and still serving in ministry.  Every church in his wake is filled with sorrow and destruction. This is also an ongoing issue.

Why have we chosen to finally publish this?

Dear church, please be sensitive to the living victims as you read and discuss this but do NOT continue to ignore them.  Thank you for having the courage to read this.  It is our hope you will also have the courage to act.

It was the early 1980’s in Sapulpa, OK. In those days FBC Sapulpa was a vibrant Southern Baptist church with an engaged membership and inspiring leadership.  The staff at that time consisted of a pastor, music minister, and a youth/children’s pastor.  As is typical of most large churches, the deacon body was comprised of powerful men of influence in the Sapulpa area.  The church had a good name in the community and was baptizing new members on a regular basis.  For those looking to raise children in the nurture and admonition of the Lord, FBC Sapulpa seemed like the perfect place to call home.  It was in this pristine moral environment that a man of unspeakable evil chose to whet his devilish appetite.

Baptist churches at this time were expanding their youth and children’s programs.  FBC Sapulpa had created a position for youth/children’s minister and was looking to have a cutting edge youth department.  They chose a man that fit the bill perfectly.  He was young, a youthful man in his 20’s. He was from the general area, Sand Springs, OK to be specific. He was also educated, claiming to have graduating from Oklahoma Baptist University. This means he was also a Baptist, another plus.

The members and leadership greeted their new youth leader with open arms.  As was expected he got straight to his work in Sapulpa.  He began teaching youth and investing personally in the lives of his pupils.  It was also observed that he befriended the mothers of several children.  This special interest in moms was not perceived as anything inappropriate .  It was instead thought of as an extension of his youth ministry and his desire to build up families.  Those mothers that were close to him greatly appreciated this special effort of this “man of God.”

In the course of time it was obvious that a handful of boys were special to this pastor.  They were taken under his wing and were mentored.  The mothers of these boys, who this youth pastor had already charmed in advance, were thrilled to see their children getting the additional attention. As he quickly got to know all the youth and children, this youth pastor opened up his own Sapulpa home for bible studies.

However, not all the children were comfortable with these home bible studies.  Some of the older boys began to notice things, subtle things, that didn’t seem quite right.  An odd comment here, a strange look there, the boys began to suspect their new youth pastor was not the charming Christian leader he claimed to be.  While some of the mothers swooned over this strapping young man, the kids were becoming increasingly uneasy.

This man’s life outside the church was also raising some eyebrows.  It was hard to believe but this unmarried youth pastor in Oklahoma in the 1980’s was apparently comfortable spending his free time with a homosexual antique dealer from Tulsa.  People also began to notice he had an unusual affinity for antiques,  preppy clothes and ritzy cars.  Odd, yes, but nobody knew what to make of it.

One typical hot Oklahoma morning while these peculiar issues were being addressed in quiet whispers in the seemingly perfect church, the children were cheerfully loading up for a trip to church camp.

FBC Sapulpa parents sent their children to this kid’s camp expecting them to have fun, make friends, and get closer to God.  The camp seemed relatively safe and was outfitted with the usual camp supplies, sports equipment, playground equipment, and cabins.  At this camp the children stayed collectively in one cabin, while the youth leader had his own private cabin.  The children attending this camp were young, all except one below high school age, but they weren’t naive.

This baptist church camp, filled with fresh faced Sapulpa boys, was the backdrop for a demonic deed that would change the life, and the eternal destiny for most of them forever.

Do you need to send this anonymously to someone via email?  Please Contact The Sapulpa Messenger and let us know.