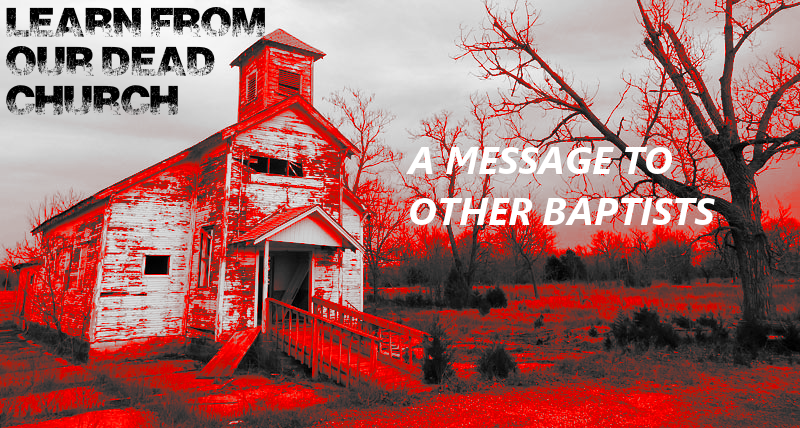 There is so much we need to tell you but so little time.  Whatever has brought your here it is our hope that you will have your eyes opened.  There are so many new programs that are destroying good churches nation-wide and they could be working their way through your own church right now.  Today our church, FBC Sapulpa, is in shambles.  Though the path to destruction was wide and winding,  the root cause is quite simple to identify.  We abandoned our basic Baptist principals.

We tried to be everything to the world.  When Rick Warren was “the man” we were a Purpose Driven Church.  When 9Marks was the answer we were a covertly Calvinist church.  When Thom Rainer sold a million books we were a Simple Church.  We ditched our Baptist congregationalism for an elder ruled hierarchy.  We abandoned the Bible for The Gospel Project.  We built stage props and coffee bars, brought in bounce houses and had block parties.  We joined forced with the UMC and the United Way.  We compromised on abortion.  We desperately wanted to be the biggest gig in town and we sold our soul to the world to get there.  Now the world has come to collect its debt.

What we traded off along the way seemed minor.  What we gain was exciting and new but proved to be superficial and fleeting.  Now it seems there is no way to return to where we started.

If you must know, 9Marks is a failure.  It is a horrific Calvinist system of elder-control discipline-enforced unhealthy hierarchy that Jesus himself spent an entire ministry railing against.

The Church Growth Movement is a failure.  At best, it floods the churches with people who do not care to be discipled but are happy to give their money and warm a seat one hour a week in order to fulfill a man made “legal” obligation to their religion.  (Sadly, most pastors are okay with this because the aforementioned monetary donations.)

There are countless other gimmicks, games, and gambles in a veritable buffet  of books and systems sold by mega-church celebrity pastors.  What is the answer?

If we held to the traditions of 50 years ago we would have nostalgia but we would be dead.  If we embraced the flavor of the month from LifeWay we would be youthful  but again we would be dead.  The answer was not in tradition and the answer was not in change for change’s sake.  The answer was what our Baptist forefathers lived and died to defend.  We need a return to our fundamental Baptist principals and we need our pew sitters to be educated on what that means.  In an era when it’s popular to drop the word “Baptist” off the marquee to try to lure in visitors, instead we should be ready to give a defense of why we are  not ashamed to be called Baptists.

If your church is flirting with the idea of elder-rule, elder-led, plural-elder congregationalism, 9Marks, or some other kind of hierarchical system you better cut it out.  These are abysmal Calvinist models and result in nothing but bondage for God’s people.  Baptists churches must be congregational, but do you know why?

In recent years, our church has seen the demise of soul competency, congregationalism, and the priesthood of the believer. We watched helplessly as our church degraded into a religious social club ruled by the rich and famous.  The people were played for fools, bled of their money, and pitted against friends and family in tests of loyalty to the staff.

Fellow Baptist, how many churches do you know that are ruled by an influential family?  If not that, how may are ruled by an abusive pastor or staff? Why are the “elders” always the doctors, the business owners, or some other kind of general aristocracy?  Look around you.  The churches are being conquered by many varieties of power-hungry overlords and the congregations are being enslaved by them.  Who should be Lord of your Baptist church?

“Each congregation operates under the Lordship of Christ through democratic processes.”  –Art VI, The Baptist Faith and Message

“You know that the rulers of the Gentiles lord it over them, and those who are great exercise authority over them.  Yet it shall not be so among you; but whoever desires to become great among you, let him be your servant.” –Matthew 20:25-26

Jesus also spent much of His earthly ministry harshly rebuking the experts of this system, the Pharisees.  It should be no surprise to us then that there are still those who desire to conquer congregations, and we must be prepared to stop them.   This is a battle we have to fight and it is a battle we will never get the luxury of retiring from.  As long as Jesus is out there setting people free, there will be others out there trying to conquer them.

Congregationalism provides the best check and balance against domineering leaders and for this reason it is often the first Baptist principal to be undermined.

Fellow Baptist, this site is for you.  It paints a picture of our church’s slow agonizing demise for you to study.  It  is our desire that the bleached bones of FBC Sapulpa will be a warning to you and your church if you are also considering sacrificing your Baptist principals. There are a thousand different things a church can do to appear fresh and dynamic but lose their way.  There are countless men who will promise to be kind masters if only you’ll slip into their shackles.  Are you prepared?

“That will never happen to our church.”

Will be our epitaph forever.

Will it be yours as well?